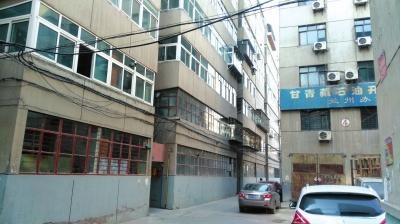 December 4, Yan Road No. 2396-2428 Lanzhou, Lanzhou Administration Institute and backyard family member courtyard within Yijuminlou was found three corpses. Three men had stab wounds. Is suicide or homicide? Bewildering case according to the reporter, Among the dead there are two women, both 34 years old this year, 37-year-old man, divorced, it is an organ in the provincial civil servants (microblogging).

Upstairs residents carried away the bodies of three

December 6, the reporter received a tip lines later to the geese Road 2396-2428. Enter the door Lanzhou Institute administration, see the 'City of the Civil Service Training Centre Jiashu' house number plate on the side of the door in the backyard of their families area, third floor of a residential building is incident floor. One uncle hospital confirmed the authenticity of the case. Grandpa said, the 4th at 3 pm, he suddenly saw the hospital 120 ambulance and police vehicles and set up a cordon around then upstairs lift out three bodies. According to neighbors say, was a middle-aged man and two middle-aged women.

Grandpa said cell belongs to Lanzhou administrative college. But there backyard Personnel Bureau, Education Bureau, Qinghai and Gansu Petroleum Development Company and other units of the family wings in addition to the family wings Lanzhou Administration Institute and outside. 'September of this year, next to the upstairs there is a woman died, are now half empty upstairs. Gan Tibet word Petroleum Development Company of residential buildings 'Grandpa, pointing to a building next to the incident, has written the floor said.

Two women of the same age for men civil servants

Reporters at the hospital when the survey interview, met a lady informed. The lady said, December 4, police rushed to the scene to start the investigation from 15:00 until 10:00 until the end of the evening, the next day, the police came again scene investigation.

The President revealed that the deceased was a male organ provincial civil servant, his father worked a particular public institutions, favorable family conditions. The man is 37 years old, divorced a few years ago, in the building alone. Parents live elsewhere. 'This M's mother the day before the afternoon to give his son to pay property charges, but paid the left, do not go to see his son. 'the woman said.

Three men who had stab wounds to commit suicide? Homicide?

Reporters from other sources that the two women were born in 1981, 34 years old this year. Three men were found dead at home, is suicide or homicide? Currently under investigation.

It is understood that the three men had stab wounds was found, the man and a woman wrist wound, another woman had stab wounds on the left abdomen, in addition, they are also suspected carbon monoxide poisoning but did not receive police confirmed. (Lanzhou Morning News chief correspondent in Yong Zhao Wen / map