How many people have to travel thousands of miles just to see the Mogao Grottoes of Dunhuang Buddhist Millennium lips smile, now, a number of art treasures from the Mogao Grottoes in Shanghai Himalayas Art Museum to show the true capacity.

29, 'Dunhuang - creatures of the song' Art Exhibition Opening, including replication of the cave, 'Dunhuang' authentic, genuine tiles, colorful and a total of 165 exhibits, many even to the Dunhuang may not be able to see the exhibits at a thousand miles to show people outside, Dunhuang Studies founders dynasties Dunhuang Research Institute, Chang Shu-hung, Duan Wenjie to make copy of the Dunhuang murals on display. This exhibition is the Dunhuang Academy and the private efforts of the two Himalayan Art Museum Achievements years. 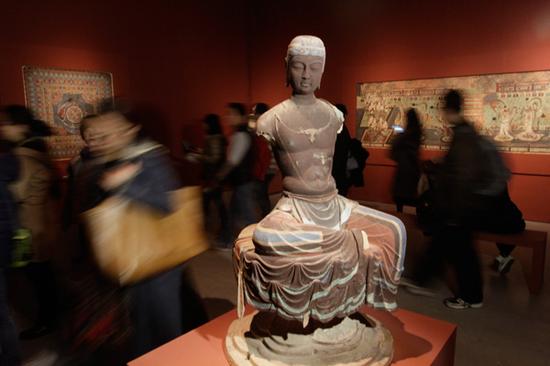 Mogao caves in the dark, leaving the painter works are common to the 4th century AD 14th century, but the gorgeous colors, smooth lines, complex patterns, all reflect the influence of religion to people's lives, and people for Elysium piety.

Copy the Himalayas Art Museum exhibition hall in the eight Dunhuang caves, except for Late Tang and another 17 outside the cave seven caves in Dunhuang local, because of the protection is not open to the public, that means that even ordinary tourists to Dunhuang, may not be able to see - cool North Cave 275, Western Wei 249 Cave, Cave 220 early Tang, Tang Cave 45, 158 in the Tang Cave, Xixia Yulin Grottoes Cave 29, paragraph 3 Yuan Cave of the original, but in this exhibition may be a glimpse of the truth of these seven caves. 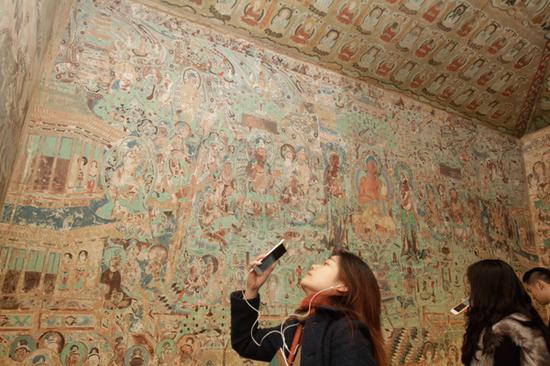 Because protection reasons, the exhibition copy cave, in addition to the Late Tang 17 outside the cave, not open to the public in Dunhuang local, while Shanghai audience can see the real capacity in the exhibition.

Tang 158 in Mogao Cave is one of the most famous Nirvana Cave, exhibitor at a ratio of 4 to 5, which will be copied out of Nirvana Reclining Buddha, lengths up to 13.6 meters.

Yuan Cave 3 is the only existing Guanyin cave theme for the Mogao Grotto Art late vanish. 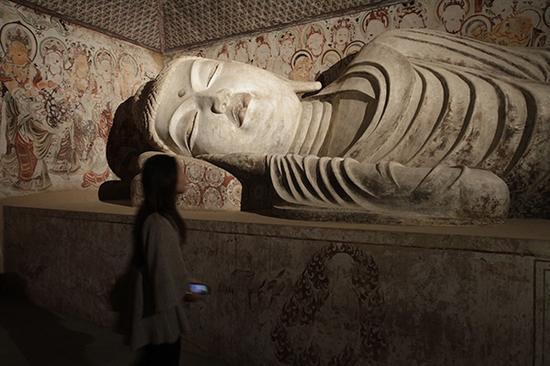 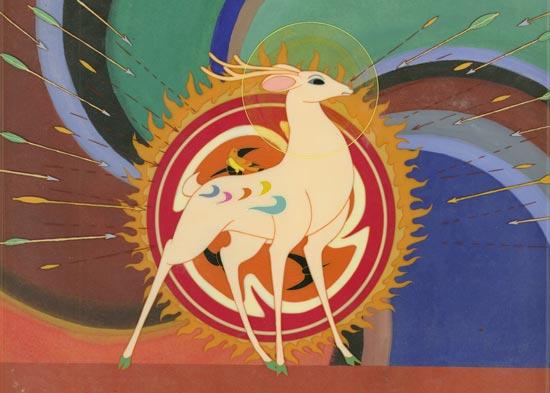 Dunhuang Library Cave was lost overseas by volume, is the Chinese people's minds the pain lasted for a hundred years, but also the study of Dunhuang Studies insurmountable obstacles.

The exhibition displays the time elapsed millennium baptism Song wine bill by a thick white linen paper to write on, unbounded field, no dating. According to research, the wine holds account Songkran Germany for two years, from April 9 to June 24 Japan 100 pen with wine accounts, described what is going on with wine because of several, each have a record of when people's daily lives.

WANG YUANLU priests guarding the Library Cave, in addition to scriptures, local people put some paper handy word play on are incorporated into the hole together, reflected the people to cherish the words and paper. There are a Tang Jingyun report two years Junyi Zhang Xun (Note: That is ancient soldier Hoon report meritorious honors instruments for 1941 Chang was in the sand in front of the Mogao Grottoes, Hoon reported as 'Gaoshen' one, except for Study of Tang Dynasty Gaoshen system outside of which you can see the names of 256 honors Birthplace.

So far this year, the Dunhuang Mogao Grottoes of visitors has exceeded 100 million, which is the Mogao Grottoes in the number of visitors exceeded one million for the first time. The Dunhuang Academy Open Management Committee and executive deputy director Li Ping told news reporters emotion, how to protect the Millennium Arts treasure, but also how to get all the way from the visitors satisfaction, become the Dunhuang Academy has always been to explore research.

Dunhuang is located in the desert, as many people dream. Because protection, many of the Dunhuang caves no longer open, because the protection of Dunhuang spent a lot of manpower and resources to the digitization process in collaboration with the world's top team has entered the first 10 years. Today, visit the Dunhuang Mogao Grottoes, 16-character principle: total control, online booking, digital display, real cave. 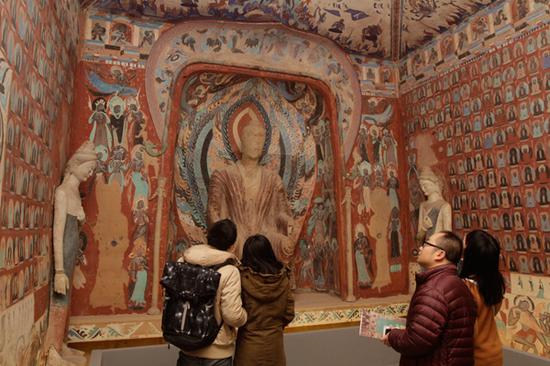 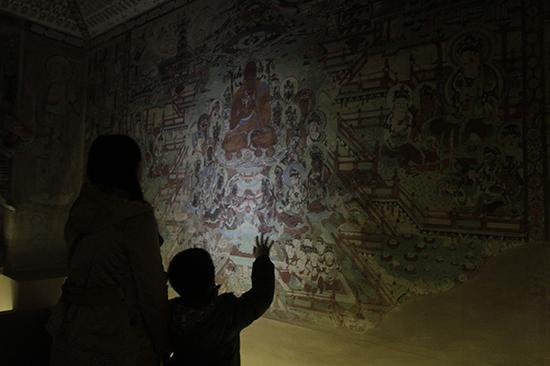 Ji Xianlin said: 'The world has a long history, vast, self-contained, far-reaching cultural system only four: China, India, Greece, Islam, no fifth, and four cultural system where only the bus one, is Dunhuang and Xinjiang region of China. 'In Shanghai high downstairs, is brushed clothes flying, is not impossible.