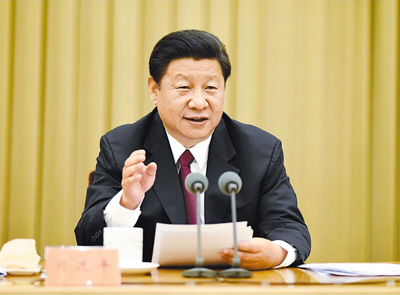 [Learn road] Today is the 65th anniversary of Tibet's peaceful liberation anniversary. Since the party of eighteen, with Comrade Xi Jinping as general secretary of the CPC Central Committee attaches great importance to the work of Tibet, the heart of the Tibetan people. On two sessions in 2013, Xi Jinping clear that 'the rule of Bristol-edge, edge first rule is hidden,' an important strategic thinking on the sixth central Tibet work forum held last year, Xi Jinping put forward six working principles of the rule of Tibet affairs and 20 words.

Today, the road will take you to learn the general secretary Xi Jinping recalled that the development of Tibet in recent years, concern, caring and wonderful stories related discussion of the Tibetan people.

Must uphold the leadership of the Communist Party of China, uphold the socialist system, adhere to the regional ethnic autonomy system,

Must uphold the rule of Bristol edge, edge first rule is hidden strategic thinking, adhere to the rule of law possession, Prosperity possession, possession of long-term construction, unite the people and consolidate the foundation of an important principle,

Must firmly grasp the principal contradiction and the contradictory special Tibetan society, to improve people's livelihood, rallying as economic and social development of the starting point and goal, adhere to the struggle against the Dalai clique policies without wavering,

Must be fully and correctly implement the Party's ethnic and religious policies, strengthen national unity, people of all nationalities continue to promote the great motherland, the Chinese nation, Chinese culture, the Chinese Communist Party, socialism with Chinese characteristics identity,

Must be the central concern, with the country to support Tibet cadres and masses of all ethnic groups in the hard work closely together to co-ordinate the work of Tibet in the domestic and international situations,

The need to strengthen the Party organizations and cadres of qualified personnel at all levels, consolidating the party's ruling foundation in Tibet.

Law possession, Prosperity possession, possession of long-term construction, unite the people and lay a solid foundation, is an important principle to work in Tibet after the party's 18 put forward by the CPC Central Committee. [More]

June 10, 2015, Xi Jinping at the Zhongnanhai to accept the Panchen Erdeni Qoigyijabu the audience pointed out that the CPC Central Committee has always attached great importance to the work of Tibet. This year is the 50th anniversary of the establishment of the Tibet Autonomous Region, the CPC Central Committee will send a delegation to Tibet with people of all nationalities together to celebrate this festival in the Party Central Committee and the people concerned strong support, I believe that in 2020 the people of Tibet will work with people across the country to achieve a comprehensive goal of building a moderately prosperous society, the Tibetan people will be more tomorrow beautiful. [More]

In May, when the earthquake relief to achieve substantive results, Xi Jinping, general secretary instructions again, certainly the earthquake relief work achieved initial success, requiring persistent efforts to continue to pay close attention to rescue trapped people, to treat the injured, proper placement affected people, and the repair as soon as possible damaged infrastructure, post-disaster restoration and reconstruction work, especially in the Tibet Autonomous Region to maintain social harmony and stability of the overall situation in the affected areas.

Xi pointed out that this year is the 60th anniversary of the Sichuan-Tibet and Qinghai-Tibet Highway opened to traffic. It was opened to traffic two highways and a major achievement under the party's leadership of the new China made in promoting Tibet's social system to achieve a historic leap, rapid economic and social development , the consolidation of the southwest frontier, to promote national unity and progress has played a very important role. That year, more than 10 million soldiers and civilians under extremely difficult conditions in unity, we created a miracle in the world's roads in the history of the end of the history of Tibet, no roads. 60 years in the construction and maintenance of roads in the process of formation and carry forward fearing neither hardship nor death, tenacious, willing stone road, a military and civilian, national unity 'two-way' spirit.

Xi Jinping stressed that under the new situation, we should continue to promote the 'two-way' the spirit, keep a good two-way, guarantee smooth, so the Sichuan-Tibet and Qinghai-Tibet Highway has become the national unity of the road, the road of civilization and progress of Tibet, the Tibetan compatriots common prosperity of all ethnic groups road.

Clearly stated, 'Bristol Country side, the first side is hidden rule' strategic thinking

March 9, 2013, General Secretary Xi Jinping to attend a meeting of the delegation of the Tibetan second session of the NPC for consideration when clearly stated, 'Bristol Country side, edge first rule is hidden,' an important strategic thinking.

Xi Jinping stressed that the Central has always attached great importance to Tibet's development and stability, highly concerned about the production and living of the masses of all ethnic groups in Tibet hope that the cadres and masses of all ethnic groups in Tibet earnestly implement the central work on a series of policies in Tibet, seize the historic opportunity to vigorously promote the 'Old Tibetan spiritual ', who had become, momentum, firm with Chinese characteristics, the characteristics of the Tibetan way of development, unswervingly safeguard and improve people's livelihood, unswervingly consolidate and develop national unity, and actively build long-term mechanism to maintain stability speeding up Tibet leaps and bounds and long-term stability, to ensure that by 2020 the country with a comprehensive grand goal of building a moderately prosperous society.