Female traffic police stand guard female teacher with children with school children: how many hardships women in the workplace?

Recently, there is such a picture on the microblogging been fueled widespread concern. Picture a child sitting beside the road, watching the passing traffic, police accompanied her mother on guard Children skinny silhouette, so users can not help but feel bad together. 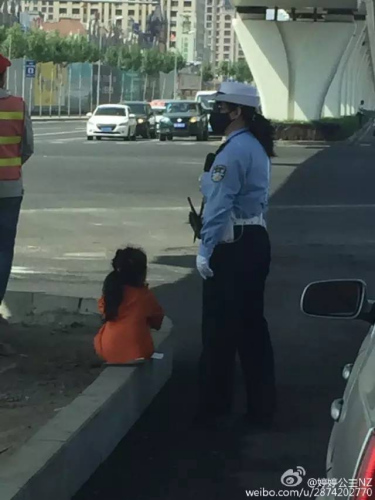 This photo of the author (@@ Tingting Princess NZ) in micro-Bo says: 'Today saw the most touching scene: She is the police, but also the mother prostrations daughter accompanied her mother sitting on the roadside guard I think.! If someone with a child, she never let her child scorching sun in the street weathered suck exhaust ...... hard work! '

Turning to this point no time to care for their children, a lot of Working mothers have admitted that this experience so that they feel sorry for their own children.

Not long ago, a female teacher with children in class photos also let many users tears ran.

Photo little girl is sick, has been pestering her mother, school, the child's mother gave her a stool in a loud classroom.

After this picture popular network, this female teacher said: 'I am a mother, not just leave a sick child care, I was a teacher, my husband can not delay the students see the photos, the evening began to cry..'

In fact, this picture is not only triggered a strong response from teachers, many women in the workplace also said he had a similar experience.

Whether sitting in air-conditioned rooms, white-collar office, the head of the sun or in the streets clean sanitation workers, everyone, every industry has its own hardships. Like people say, this world is not an easy job. for women, it is especially true.

Reporters do hard, hard to do, especially female reporters this regard, the famous writer sixty-six said: Female reporters are really hard, especially when there is breaking news, is no less a man ran up, wearing high heels can not just run.

In addition to interviews, writing, the female reporter also like men, who get their own heavy equipment, to undertake those manual labor alone.

A nurse said:. 'A few hours of surgery often, operating room doctors and nurses do not have time to eat more patient, acute illness when, for a surgeon, nurse, or a few, have to continue to stand, indeed too tired.' 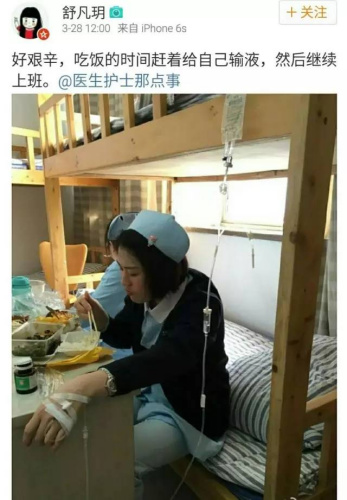 Users said the same for nurses, sick or belly like to work, not that we do everyday?

For taxi drivers, the day's work, most of it to the taxi company, as well as part of the cost to give gas stations, you can not get a lot.

In the middle of the night, when other female friends may have to work, go home, get together with my family, and these female driver was alone on the road, at the time of hard work, but also to protect their personal safety.

Whether it is in the morning or late at night, whether it is pouring rain or sunshine, the steady stream of lanes, bustling market, it has never lacked sanitation workers on the scene. In the face of heavy, hard work, work standards will not become sex What is the difference.

In 2015, a well-known blogger forum 'love to read The Analects' took such a picture, an eight-year-old girl in one hand and dustpan in one hand and a broom, carefully sweeping the roadside foliage. Because my mother work too hard, a little girl who could not bear the mother involved, will come and help.

Taobao shop owner on a customer service issue said: 'One time a customer they are wrong size clothes, returns only after scolding us not even going to say that we've a big liar customer service girl wronged cry, endure. could not back a few words, the result was fined 50 dollars. '

There are many industries, there are many hard, we play no matter what kind of role in the community, even if we can not completely identify with their occupation of others, it should also give respect to others, in order to give women respect.

When they go out, obey the traffic rules, chaos through a red light, does not cut in the lane, which is respect for the traffic police,

School children, a good school, positive thinking, earnestly fulfill the tasks assigned by the teacher, which is respect for teachers,

When to see a doctor, the hospital's compliance with the rules, not free to hurt health care, which is respect for nurses,

No littering garbage, the garbage into the trash, do not be thrown away hazardous materials, which is respect for sanitation workers,

Even if he is very angry, not arbitrary abuse of others in the communication, which is respect for the customer service,

If people can be between mutual understanding, mutual respect, then we will be the beneficiaries of this warm community. 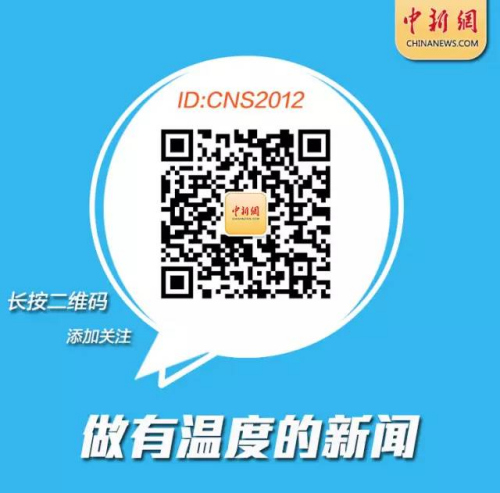